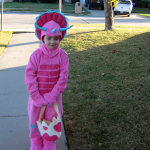 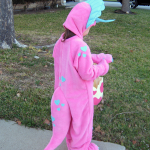 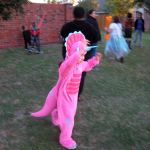 
I love making my niece’s Halloween costume every year. LOVE. I always start planning earlier and earlier every year because I’m so excited to make it and this year, we had decided on making her a rainbow princess. I had sketches galore and had even started buying the sparkle tulle for the skirt and designing the trick-or-treat bag. It was going to be magnificent. Then a month or two before Halloween, she sees that I’ve bought a new pattern and it was all over. She wanted to be a dinosaur so she could stomp and roar.

Fair enough. I’m a big proponent of letting the kid be whatever she wants to be from a slice of bread to Buzz Lightyear. I’m also not the biggest fan of gender stereotypes and my niece’s interest in being pretty vs. talented. So while I was a little disappointed that I’d have to return all the rhinestones and tulle, I was really proud of her for choosing something different this time. Of course, she still wanted it to be pink.

The costume wasn’t tremendously challenging, mostly because I actually did have a pattern to go by. The fabric is a cuddle fabric of some sort, a bit stretchy, brushed on one side and sort of like a micro terry on the other. It shed *EVERYWHERE* and was impossible to rip the seams out of without ripping a matching hole in the fabric no matter how careful I was. There were quite a lot of repaired spots along the seams by the time I was done with it. Luckily it didn’t show thanks to the fuzz.

The aqua and darker pink parts are felt as is the entire trick or treat bag (which I designed and sewed in about two hours). I used fabric glue for the first time (and hated it) for all the spots and front stripes. The hat was actually pretty annoying to sew together because the frill and horns had to be hand sewn on. I was extremely lucky to find a glass mannequin head in the closet (why on Earth do I have one of those?) and the hat fit on it so I was able to stitch it on right. Otherwise I have no idea what I would have done.

So yeah, it was a big hit. She got lots of compliments, lots of candy, and proudly swung her tail when she walked. It was a nice change from the usual girly costumes and I’m really looking forward to making her whatever she wants to be again next year. Hopefully it’ll be an astronaut.

Oh! One last thing that I have to mention here. The felt I used was so nice to work with, not like that usual scratchy stuff you get at the craft store. It’s still acrylic so the price is reasonable, but it was so smooth and cut beautifully, and comes in lots of colors. I got it on Etsy from FeltForLess. I’m not really one to plug things but this is the only felt I will use now. It’s awesome and you should know about it. Brittney (the shop owner) is also really nice and she ships stuff quickly. I honestly can’t say enough nice things about her and her product.